FAYETTE COUNTY, Ga. (CBS46) – As more colleges offer scholarships for students interested in careers in the booming video game industry, more girls are jumping on board.

Some of them are right here in Georgia.

CBS46 recently got a glimpse inside Renee Waters’ classroom at Whitewater High School in Fayette County. Waters is an animation teacher, chair of the Career and Technical Education Department, and the varsity coach of the school’s Esports team.

“It’s not your typical sport,” Waters said. “It’s a season just like any other sports. We have a fall season and then we have a spring season.”

The roughly 30 students on her squad break into teams that compete with other schools in games such as League of Legends and Smash Bros.

“To parents, it’s always been, ‘They’re just playing a video game. They’re up there, been playing for hours,’” she said. “No, they are developing skills, particularly problem-solving skills.”

Waters said once parents learn those gaming skills could help their children earn college scholarships, they start to get it.

Currently, there’s only one girl on the Whitewater team. Noel Henderson is a senior.

“Freshman year, I was so anxious coming in here,” said Henderson.

She’s now thinking about majoring in animation in college, thanks in part to Esports.

“It’s super exciting,” she said. “It’s kind of nerve-wracking, but once you get through the first match, you really get into the game.”

Katie Ryckeley is also a senior at Whitewater. She was on the varsity team last year and now plays on her own competitively.

“I’ve really been wanting to create my own games for a while because I’ll play it and go, ‘Oh I really like this. I want to further extend on it,’” she said.

Keshia Walker is glad to hear that Esports is becoming more popular for girls. About a year ago, Walker was talking with her pre-teen nephew about his passion for gaming when she realized there’s a lack of diversity in the gaming industry.

“When he showed me the professional gamers, the top 10 gamers he was following, they were all white males and Asian guys, and I’m like, ‘Something’s wrong with this picture.’ I’m like, ‘Nobody looks like you, and there’s definitely nobody that looks like me,’” said Walker, who is Black.

That lack of diversity is why Walker founded the Black Collegiate Gaming Association.

Previous Article‘This Is Our Moment to Be Ahead of the Curve’: What Esports Could Mean for HBCUs
You May Also Like 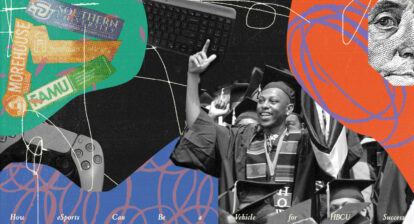 ‘This Is Our Moment to Be Ahead of the Curve’: What Esports Could Mean for HBCUs
February 5, 2021